Description: Dye- Sensitized Solar Cell (DSSC) is known for its low-cost, simple fabrication process, durability and relatively high efficiency. Typical DSSCs is made of I-/I3- redox couple liquid electrolyte sandwiched between dye coated TiO2 (photo anode) and transparent Tin oxide coated by platinum (Pt) substrate (counter electrode). Although Pt is one of the most selected superior material for catalyzing I– to I3 –, its weak chemical stability i.e., it decomposes to PtI4 or H2PtI2 in triiodide/iodide electrolyte and its high cost restricts the scale up production for DSSC. So, it is necessary to go for an alternative counter electrode with high stability from abundant materials. In that case, Metal sulphides are found to be one of the best alternative materials. I’m currently working on synthesis part of metal sulphides and followed by fabrication process. 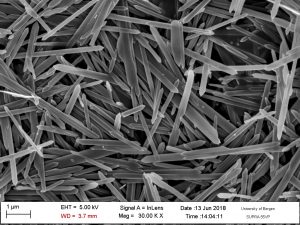 Title of The Research:  Photon Upconversion as a Tool to Harvest Infrared Radiation for Direct Illumination in the Dark and to Fabricate Dye-sensitized Solar Cells to Generate Electricity Under Illumination as well as in the Dark.

Description: In the present world, solar radiation acts as the energy input in the growth of energy systems, which can meet the future global energy demand. There are mainly two different approaches to store the energy, batteries and capacitors. Batteries convert and store the electrical energy as chemical energy but capacitors store the electrical energy and give this energy again to the circuit when necessary. In my proposed study, heterostructured materials in the form of   nanocomposites will be synthesized, characterized and their solar energy storage efficiency will be thoroughly investigated. 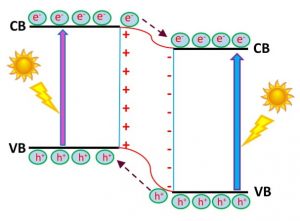 Title of The Research: Advances and Perspectives of Environmental Friendly Perovskite Solar Cells

Description: The main reason of Perovskite solar cells in today’s photovoltaic is its rapidly increased PCE up to 22.1% within a decade.  This highest PCE obtained by using only lead (Pb) based metal as light absorbing material. Though the chemical instability and environmental hazardous of lead being a big challenge, many efforts based on improving stability has been achieved by modifying the halogen ions (Cl-, Br- and I-) and by exchanging divalent organic cation (CH3NH3I). Although, the percentage of lead consumption in perovskite is low; its water solubility and chemical instability can lead to harmful environment and acts as carcinogenic agent to the humans.

Title of The Research: Role of thiophene derivative dyes in enhancing the performance of hybrid titanium dioxide / polymer solar cells

Description: The modern world is experiencing the shortage of fossil fuel resources due to the rapid growth of population and technology. This prompted the search for developing cost-efficient clean energy sources. Regarding electricity supply, photovoltaic device (Solar cells) is the best clean energy sources among all other energy sources due to the advantages such as direct solar energy conversion without any intermediate stage, no moving parts, require little maintenance and they are silent in operations. Molecular electronic materials such as dyes, conjugated polymers, and small molecules are gaining much interest for applications in Photovoltaics. In particular, polymer blend and dye synthesized (photo electrochemical) solar cells play a major role in the field of organic Photovoltaics. 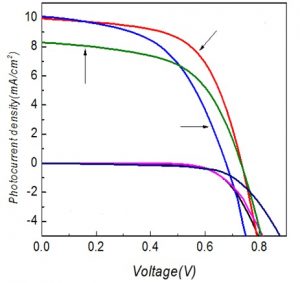 Description: Titania nanorods with rutile phase are prepared by hydrothermal method. This functions as photo electrode for DSSC. The aim of the project is to utilize natural dyes as sensitizers for DSSC. This minimizes the cost of the solar cell and the preparation is also easier. But the stability of dye is very short compared to synthetic dye. The factors affecting the degradation of dye are studied and improvements are taken to increase the photovoltaic performance of the cell using natural dye. Dye from rose flower is used as a sensitizer.  Platinum and iodine/ iodide are used as counter electrode and liquid electrolyte respectively for DSSC fabrication. The following strategies such as using citric acid as solvent to extract dye, adding algal buffer layers on the TiO2 film to improve the dye anchoring, preparing Ca doped nanorods to reduce the photocatalytic activity and utilizing algal co-sensitization to improve the dye stability were the measures performed to improve the solar performance of the cell from 0.67% to 3.01%. 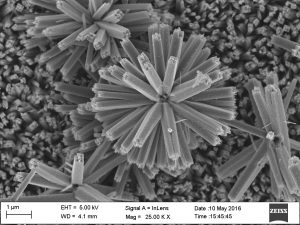 Description: Dye Sensitized Solar Cells (DSSCs) are found to be low cost energy conversion devices with simple fabrication procedures, lightweight and environment friendly operation. However, relaxation and recombination processes hinder the performance of DSSCs. Use of doped or co-doped TiO2 electrode in DSSCs may improve its performance as doping  aﬀects the band structure and traps  TiO2 states which in turn modifies properties such as the conduction band energy, charge transport, recombination and collection. Hence, Our research will focus on improving charge transport and minimizing electron-hole recombination in DSSCs using  Ruthenium and selected rare earth element  co-doped TiO2 as electron transporting material (ETM). 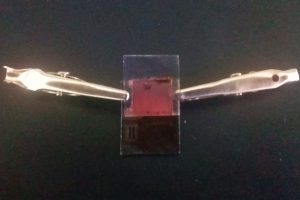 Description: The primary objective of this proposed work is to fabricate perovskite based solar cells with enhanced performance and long-term stability by using appropriate interfacial/surface engineering. It has been proposed to use interfacial/surface modification in the perovskite-based solar cells by introducing a carbon based or doped nanocarbon layer into perovskite device architecture. 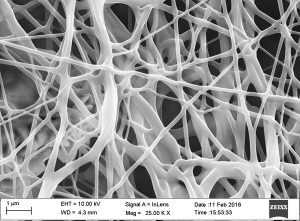 Title of The Research:  Fabrication of Electron Transport Layer by employing TiO2 based one dimensional  Nanostructures

Description: My main stream of research is on the fabrication of Electron Transport Layer by employing TiO2 based one dimensional nanostructures for All-Inorganic Perovskite solar cell application. I am currently engaged in the synthesis of TiO2 based nanostructures by chemical and physical synthesis routes. Even though lot of research studies have been published using TiO2 as an electron transport layer (ETL) in solar cell application, I found deep interest in elucidating the interaction between TiO2 based one dimensional nanostructured ETL and Perovskite layer. Moreover I’m highly motivated to emphasize the dual role of Electron transport layer, serves as a photoanode and scaffold to the perovskite layer, and to study its performance by adopting different surface engineering techniques. Here I have particularly chosen the All-Inorganic perovskite material to overcome the stability issues pointed by organic –inorganic perovskite materials. 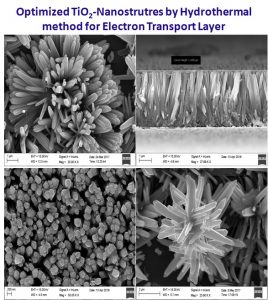 Title of The Research: Enhancing the performance of Perovskite solar cells by incorporating carbonaceous nanomaterials

Description: According to International Energy Agency 16 % of the global population (1.2 billion people), do not have access to electricity. Since the solar irradiation is a non-exhausting reservoir of energy, cost efficient Solar panels are expected to be a key sustainable solution for meeting electrical energy needs of the world. In this regard, the perovskite solar cells (PSC) gain much attention due to its high efficiency and low-cost of production. However, stability of perovskite and carrier conducting materials towards moisture and UV irradiation is found to be the major challenge in its long-term application. This study focuses on improving the efficiency of PSCs by utilizing different types of carbonaceous materials as the electron transporting material (ETM) and hole transporting materials (HTM). 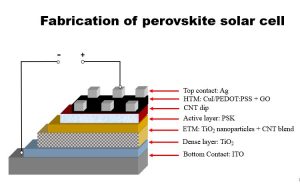 Description: In the present global scenario, clean and green energy have attrated wide attention and solar energy posessing the above candidature is considered as one the prime energy resource.  Electron transport layers (ETL’s) is an important part in the solar cells. Among the different type of ETL’s used, Semiconducting nanoparticles/nanostructures in Dye sensitized and Perovskite solar cells are more efficient and it has a better stability when compared to other types of ETL’s. 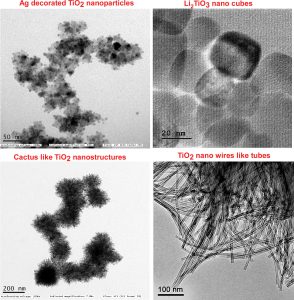 Description: Semiconductor quantum dots such as CdS, CdSe which can absorb light in visible region, can serve as sensitizers as they are able to transfer electrons to large band gap semiconductors such as ZnO and TiO2. In addition these quantum dots open up new way to utilize hot electrons or generate multiple charge carriers with a single photon and also offers better junction formation with solid hole conductors. Impact ionization process results in the production of two or more excitons with a single photon of energy greater than twice the band gap. My research aims in realizing quantum dot sensitized solar cells by deposition of CdS and CdSe quantum dot on to ZnO/ TiO2 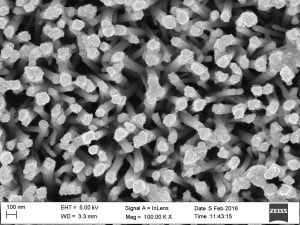 Description: The Plasma Based Ion implantation process is versatile technique to modify the surface of the materials. The new form of construction of surface modification has been achieved through this technique with very low-pressure environment to ensure the purity. Carbon is a main tool to incorporate at different substrates such as Polymers, Metal-Oxides and etc., by Plasma Ion Implantation method, to produce high purity materials for the excessive properties of super hydrophobic and biomedical implant applications. The specific tool as Invitro bioactivity deals the enhanced property of Anti-Bacterial activity, highly cell adhesive and drug delivery system.