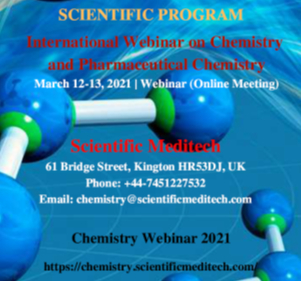 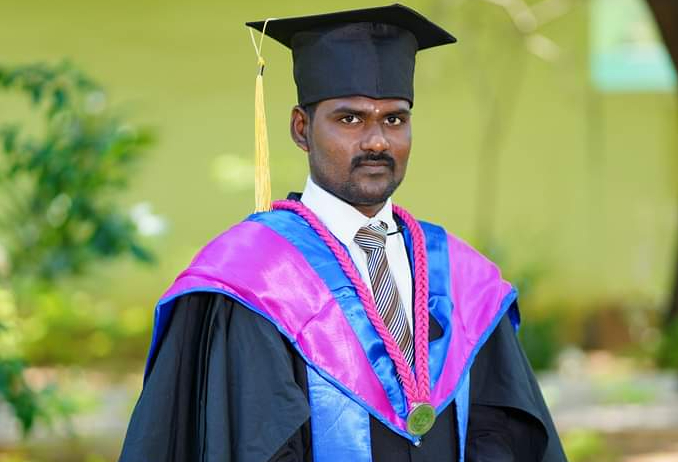 Siva Uthayaraj was awarded a Master of Philosophy (M.Phil) in Physics in 2017 under the HRNCET project funded by NORPART. His research focused on synthesis, fabrication and characterization of perovskite solar cells with particular emphasis on the incorporation of carbonaceous materials in perovskite solar cells to improve its performances and device stability.

During his study period, he had visited the Western Norway University of Applied Sciences twice for research stays of six months each. These visits gave him the opportunity to carry out several research activities including fabrication of perovskite solar cells with advanced sophisticated research equipment and characterization of devices and thin films using X-ray diffraction spectroscopy, Scanning Electron Microscope (SEM), UV-VIS spectroscopy, FTIR spectroscopy and photovoltaic measurements. He has also participated in seminar and workshop learning activities on Nano materials for Clean Energy and Health Applications held at Coimbatore Institute of Technologies (CIT), India in 2020. These opportunities has led him to meet several like-minded researchers enabling him to learn new techniques and improve his research skills.

Siva Uthayaraj successfully completed his MPhil in 2020. His thesis is titled ‘Enhancement in the Performance of Perovskite Solar Cells by Incorporation of Carbon Nanotubes’.

“I extend my sincere appreciation to the Royal Norwegian Embassy in Sri Lanka and the HRNCET/NORPART project for providing me with the research grant and the chance to carry out my MPhil study. During this period, I had the opportunity to visit HVL twice for my research stays, where I was able to work on synthesis, fabrication and characterization of perovskite solar cells with advanced equipment.

This was a completely new experience for me not only academically, but also the experience of being in a new country with amazing cold weather. The ice-skating and the interaction with friendly Norwegians are somethings I would cherish.” 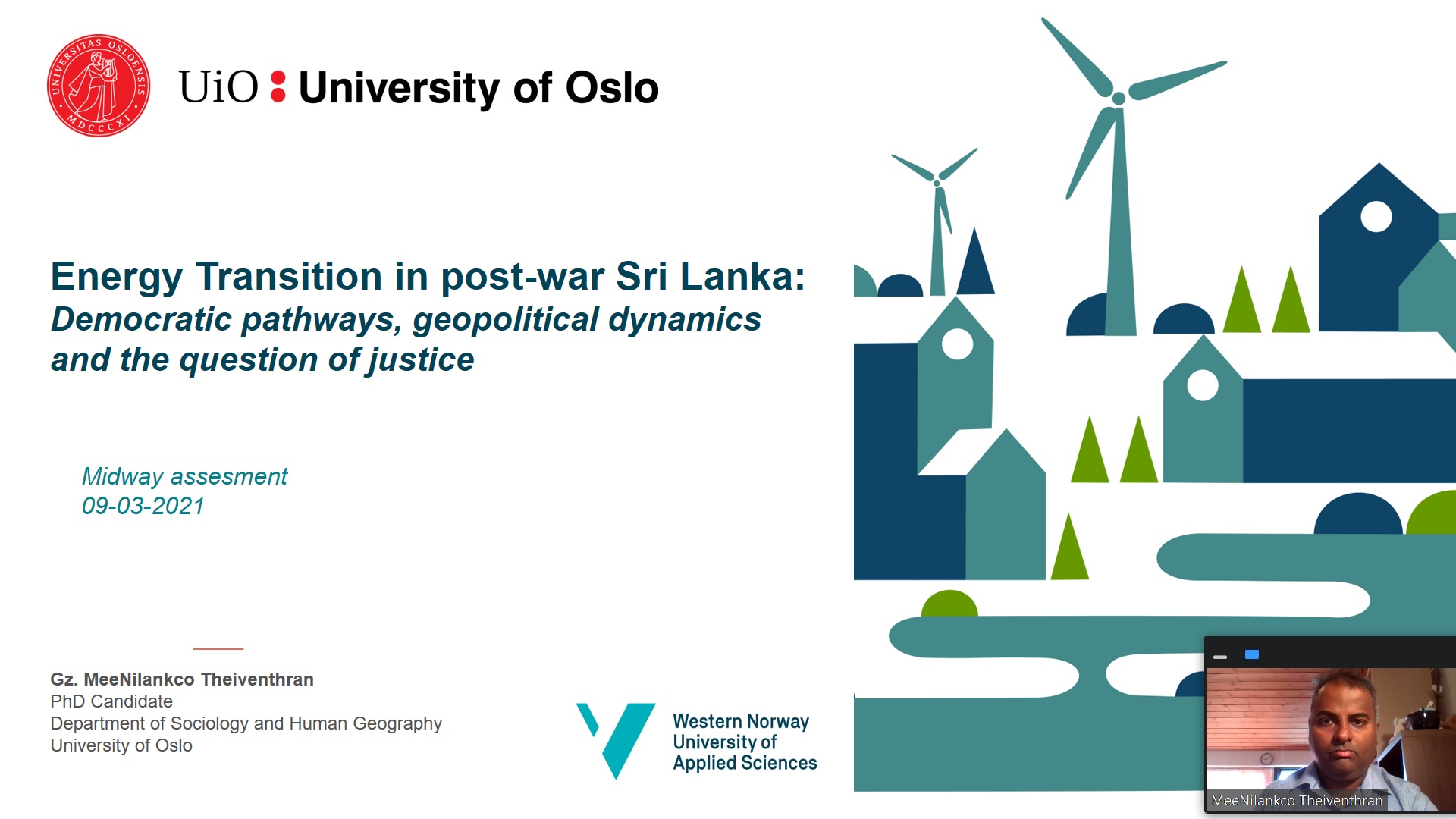 On Tuesday the 9th of March, our PhD research fellow Gz. MeeNilankco Theiventhan had his midterm evaluation at the University of Oslo digitally. The evaluation started with a presentation by MeeNilankco, he presented his paper titled “Titanic encounters: Energy as a geopolitical battleground in Sri Lanka”. After the presentation, Prof. David Jordhus-Lier (UiO), as the reviewer and evaluator, shared his comments on the paper and progress plan. A useful discussion followed where MeeNilankco’s supervisors’ also contributed to the discussion.

Six students have arrived at the Western Norway University of Applied Sciences (HVL) from Sri Lanka and India for six-month research stays funded by the “student mobility program” of NORPART and UTFORSK respectively. The first batch of students arrived in November 2020 and the second batch in January 2021.One of these visiting scholars has completed his PhD and is a visiting researcher, two are PhD students and three nearing completion of their Masters. While some have previously visited HVL for research, for two students this visit is their very first overseas experience.

During their stay the students will get to work with different sophisticated instruments and equipment gaining practical experience on their use in different fields related to clean energy applications such as emerging solar cell technologies, hydrogen and energy storage.

“I extend my sincere gratitude to HVL for not only the opportunity given to us but also to the extra care and efforts extended during our travel and arrival to Bergen with the prevailing pandemic situation.

The laboratory at HVL gives me great confidence to test my research skills. The beautiful Bergen with cold weather is a totally new experience for me. I am confident that this research stay will not only enlighten my academic career but will also provide me with many life experiences”.

“Like many Indian students, it is a dream come true for me to come and work in a university in a European country. It has given me a new platform to work and develop my novel ideas.

Apart from my research work, life’s new experience from living in a new environment, meeting new people from different backgrounds and culture has been profound. I thank HVL for giving me this great opportunity”. 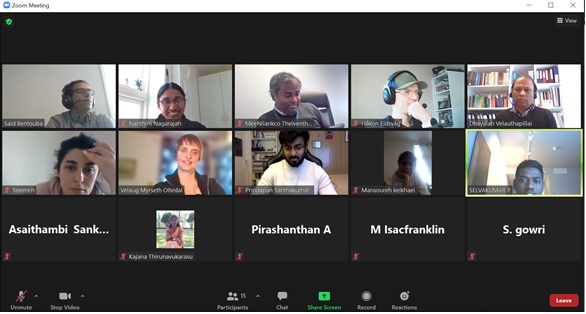 The first seminar of the ANCEHA research group was held on 12/02/2021. Associate Professor Dr. Bentouba Said presented the topic of the seminar, which was on Renewable energies, research development, challenges and opportunities.

A  conference on Sustainable Development Goals is arranged by in Bergen by our funding agency Norwegian Agency for International Cooperation and Quality Enhancement in Higher Education (Diku, formerly known as SIU) the coming week. As part of the conference a panel discussion is arranged on Wednesday, 10th of February from 15.30 to 17.00 (Norwegian time), from 20.00 to 21.30 (Sri Lankan time) and I am invited to take part in the discussion reflecting our experience with collaboration under the NORPART project with Sri Lanka. We are also going to have 2 min video on our projects in Sri Lanka. The discussion is on how higher education and research both away and at home can be enhanced through these type of collaborative projects. The discussion will be in Norwegian through zoom, but it will be nice if  students and staff who are associated with Norpart project and our research group register themselves.  Director of Norad and representatives from the ministry of education will also be at the panel discussion.

The discussion was focussed on ways to strengthen collaboration, project activities and initiatives within the group at HVL as well as with our partner institutions in India and Sri Lanka during the pandemic.

It was noted that the size of the group and its activities have expanded. HVL has established a new collaboration with the Alahappa University in India to work on hydrogen production and has also introduced courses on hydrogen at HVL.

Research stays of students from the partner universities in India and Sri Lanka with HVL continues. A Masters student from the Electrical Engineering department of HVL will be jointly supervised by HVL and University of Jaffna and will visit Sri Lanka during his research stay.

Two Sri Lankan students have been undergoing research training at HVL. Sivagowri Shanmugaratnam and Kajana Thirunavukarasu from the Department of Physics, University of Jaffna, arrived on 22nd of November 2020. They are conducting research at HVL under Professor Dhayalan Velauthapillai. 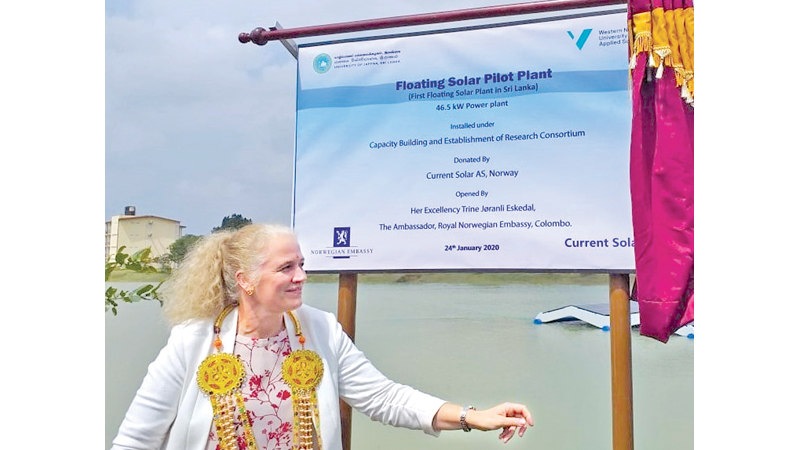 Floating solar panels for clean energy production is considered to be another promising route for Sri Lanka on its journey towards achieving renewable energy targets in view of its vast number of existing natural and man-made water bodies.

As yet another collaborative initiative between Norway and Sri Lanka, the Ambassador to Norway in Sri Lanka, HE Trine Jøranli Eskedal, declared opened the first floating solar power plant on 24 January, 2020 as an introductory step to be used as a floating research lab as well as an information sharing base including being an educational exhibit to encourage and enthuse the native population at large towards transitioning to clean energy. Reflecting the collaborative project work between the Western Norway University of Applied Sciences and the University of Jaffna, Sri Lanka, this first floating solar panel was launched in the premises of the University of Jaffna, Kilinochchi campus.

The 42 kW energy produced by this exhibition plant will partly electrify the university premises in this campus. The project was made possible with the support of Innovation Norway and the Norwegian energy group Equinor. The floating solar plant was designed and developed by Current Solar
AS, a Norwegian solar developer. This particular design is based on Norwegian marine knowhow from offshore and aquaculture industries and innovatively combines the use of composite beams for mounting the solar panels.

On her visit, the Ambassador also inspected the Clean Energy Research Lab at the University of Jaffna which was also assisted by the Royal Norwegian Embassy in Sri Lanka to promote research on clean energy technologies.