Professor Alfred Christy, Professor of Chemistry, Agdar University, Norway, visited Jaffna on March 19, 2018 after delivering talk and having discussion with Professors Rajapakshe and Kumara and their group at the department of Chemistry, university of Peradeniya on 14.03.2018.

On 19.03.2018, he had discussions with academics and research students at the Research laboratory, Department of Physics, and the Department of Chemistry.  The meetings were mainly aimed for the future collaboration on ‘Water Splitting for clean energy applications and he encouraged the academic staff to write a concept paper for initiating collaborative research on Water Splitting for Clean Energy Applications at the university of Jaffna. 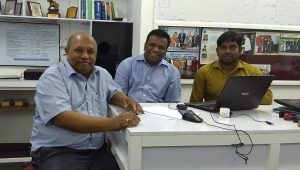 Both Physics and Chemical societies had requested him to make presentation/lectures on Operating principles of Spectroscopic analysis. On the next day, he spent much time at the Research laboratory, department of Physics met with the research students, and discussed about their ongoing project work as well as preparing for the presentation on March 22, 2018. On March 21, 2018 he spent his time at the Faculty of Engineering, Ariviyal Nagar, Kilinochi and delivered a talk on “Quantitative determination of calcium hydroxide in concrete by Near infrared spectroscopy” organized under HRNCET project in collaboration with the Institution of Engineering Sri Lanka Northern Province Center and Kilinochchi Chapter . The talk was well received and it was beyond the expectation as more than 80 participants (staff, engineers and students) attended.

On March 22, 2018, Prof. A. Christy delivered a talk on “Operational Principles of Spectroscopic Techniques”which was jointly organised by Chemical and Physics Societies of Faculty of Science, University of Jaffna. Despite the Non-academic strike at the university, about 40 people, including academic staff, final year students, research assistants attended the talk. In his talk, he covered the operating principles of UV/Vis and Infrared spectrometry. Further, he cherished his experiences as an academic staff at the University of Jaffna.

On the request made by Professor Christy, Dr. (Miss.) Shivatharsiny Rasalingam made a presentation on “Basics of Water Splitting” as he wanted to know the experiences and the ongoing work at the University of Jaffna in order to lead the future collaboration in the field of Water Splitting for clean energy applications.   Dr. (Ms.) R. Shivatharsiny briefed her experiences, in particular, in the field of heterogeneous water splitting. On behalf of both Physics ad Chemical societies, Dr.P.Abiman, Head/Chemistry acknowledged the speakers. A concept note with budget detail was sent to Professor Christy with a copy to Professor Dhayalan.

Overall, Prof. A. Christy’s visit to University of Jaffna was very productive, and we hope he is leaving Jaffna, after fulfilling the hopes what he brought with!

Professor Christy has accumulated an impressive list of scientific achievements during his career. He has published over 100 papers in scientific journals and presented more than 110 lectures at conferences, institutions of higher learning and industrial establishments around the world. Professor Christy has authored several book chapters and reports. He coauthored a book entitled “Modern Fourier transform Infrared Spectroscopy” (A. A. Christy, Elsevier-2001). He has also been a co-editor of a second book “NIR spectroscopy in Food Science and Technology” (Wiley, 2006). Professor Christy has acted also as a referee for some 25 different International Journals across a wide spread of disciplines related to chemistry.

Professor Christy has been included in several biographical directories from 1991 onwards. He has also received several awards such as “Man of the Year 1994”, “20th Century Achievement Award (1995)” and several other honours such as “Five hundred leaders of influence in the world”.